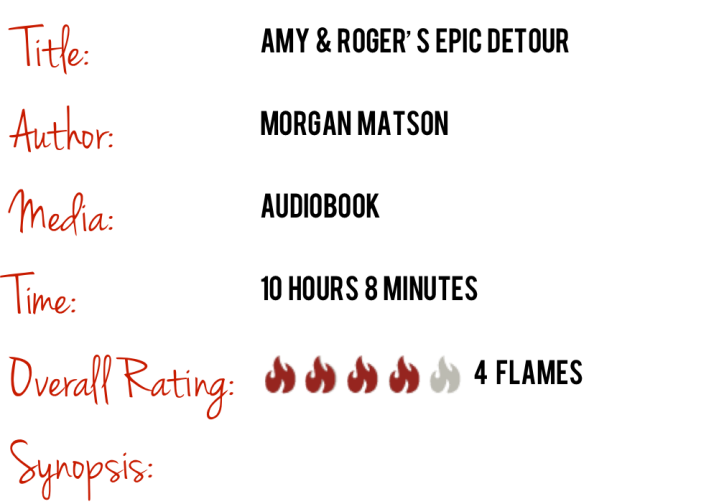 Amy Curry is not looking forward to her summer. Her mother decided to move across the country and now it’s Amy’s responsibility to get their car from California to Connecticut. The only problem is, since her father died in a car accident, she isn’t ready to get behind the wheel. Enter Roger. An old family friend, he also has to make the cross-country trip – and has plenty of baggage of his own. The road home may be unfamiliar – especially with their friendship venturing into uncharted territory – but together, Amy and Roger will figure out how to map their way.

Last year I listened to Matson’s Since You’ve Been Gone on audio and I just loved it, so I knew I needed to get to her debut book, Amy and Roger’s Epic Detour. I have seen this book around for years (it was published in 2010) and for whatever reason I just never picked it up.

This story was incredibly sweet and made me reminisce on a few road trips I’ve taken with my BFF and long to plan another.

Amy is dealing with the grief of losing her father and knowing that she played a role in his death. Her mother has decided that they need to move from their home in California to Connecticut to be with Amy’s grandmother. Amy only has one month of school left, so her mom lets her stay in California alone and finish out the year, with the stipulation that when school is out, she will take a road trip with her mother’s friend’s son to bring the car to Connecticut.

Amy’s mother has the route that Amy and Roger need to take planned out down to the hour along with hotel reservations made for when they need to sleep. There is no room in the schedule for exploration or sightseeing and Amy and Roger decide to break the rules and take a few detours.

The narrator of the audiobook, Suzy Jackson, did a fantastic job, but I often found myself wishing that I was reading the physical book. Each chapter begins with a playlist (which was slightly nostalgic for me as a lot of the bands/songs were ones that I listened to back in 2010 and earlier) and there were a few emails and other things that I thought it might have been beneficial to see in print and read myself. And now that I’m writing this review and I grabbed the Goodreads synopsis I see that there pictures of the road trip sights throughout the book as well! I might just have to go buy the physical book now. 😉

Obviously romance plays a role in this book, but it’s one of those slow burns. The focus of this book is more about self-discovery, forgiveness, and family relationships.

I am officially a big Morgan Matson fan and I plan on buying her newest book, The Unexpected Everything on May 3rd when it hits stores. She has another book called Second Chance Summer that I plan on checking out soon as well!

I know I’m late in the game – are you a Matson fan? Which is your favorite?