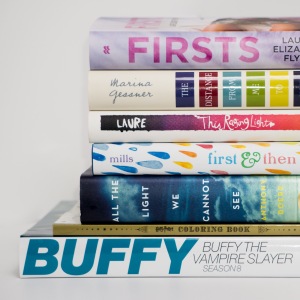 I went a little crazy at the book store the other day while looking for some contemporary novels to help me break up the tons of fantasy that has been stacking up on my shelves lately. Sometimes you just need to cleanse your palate, you know?

So, from top to bottom in order of the picture, here we go!

Seventeen-year-old Mercedes Ayres has an open-door policy when it comes to her bedroom, but only if the guy fulfills a specific criteria: he has to be a virgin. Mercedes lets the boys get their awkward, fumbling first times over with, and all she asks in return is that they give their girlfriends the perfect first time- the kind Mercedes never had herself.

Keeping what goes on in her bedroom a secret has been easy- so far. Her absentee mother isn’t home nearly enough to know about Mercedes’ extracurricular activities, and her uber-religious best friend, Angela, won’t even say the word “sex” until she gets married. But Mercedes doesn’t bank on Angela’s boyfriend finding out about her services and wanting a turn- or on Zach, who likes her for who she is instead of what she can do in bed.

When Mercedes’ perfect system falls apart, she has to find a way to salvage her reputation and figure out where her heart really belongs in the process. Funny, smart, and true-to-life, FIRSTS is a one-of-a-kind young adult novel about growing up.

I’m super excited for this one! The description reminds me a lot of the movie Easy A with Emma Stone which I love.

The Distance from Me to You by Marina Gessner.

Wild  meets  Endless Love  in this multilayered story of love, survival, and self-discovery.

McKenna Berney is a lucky girl. She has a loving family and has been accepted to college for the fall. But McKenna has a different goal in mind: much to the chagrin of her parents, she defers her college acceptance to hike the Appalachian Trail from Maine to Georgia with her best friend. And when her friend backs out, McKenna is determined to go through with the dangerous trip on her own. While on the Trail, she meets Sam. Having skipped out on an abusive dad and quit school, Sam has found a brief respite on the Trail, where everyone’s a drifter, at least temporarily.

Despite lives headed in opposite directions, McKenna and Sam fall in love on an emotionally charged journey of dizzying highs and devastating lows. When their punch-drunk love leads them off the trail, McKenna has to persevere in a way she never thought possible to beat the odds or risk both their lives.

I saw this one on a shelf at Barnes & Noble a few months ago and I have to say I’m a sucker for a survival story. I hope it’s as good as it sounds!

This Raging Light by Estelle Laure.

Can the best thing happen at the worst time?

Her dad went crazy. Her mom left town. She has bills to pay and a little sister to look after. Now is not the time for level-headed seventeen-year-old Lucille to fall in love. But love—messy, inconvenient love—is what she’s about to experience when she falls for Digby Jones, her best friend’s brother. With blazing longing that builds to a fever pitch, Estelle Laure’s soulful debut will keep readers hooked and hoping until the very last page.

I actually read this one before writing this post, and I thought it was just okay. I’ll be posting a full review tomorrow.

First & Then by Emma Mills.

Devon Tennyson wouldn’t change a thing. She’s happy watching Friday night games from the bleachers, silently crushing on best friend Cas, and blissfully ignoring the future after high school. But the universe has other plans. It delivers Devon’s cousin Foster, an unrepentant social outlier with a surprising talent for football, and the obnoxiously superior and maddeningly attractive star running back, Ezra, right where she doesn’t want them first into her P.E. class and then into every other aspect of her life.

Pride and Prejudice meets Friday Night Lights in this contemporary novel about falling in love with the unexpected boy, with a new brother, and with yourself.

This cover is adorable and I am seriously on the hunt for an adorable romance that will make me swoon. I’ve been let down lately, so I’m really crossing my fingers for this one!

All the Light We Cannot See by Anthony Doerr.

WINNER OF THE PULITZER PRIZE
From the highly acclaimed, multiple award-winning Anthony Doerr, the beautiful, stunningly ambitious instant New York Times bestseller about a blind French girl and a German boy whose paths collide in occupied France as both try to survive the devastation of World War II.

Marie-Laure lives with her father in Paris near the Museum of Natural History, where he works as the master of its thousands of locks. When she is six, Marie-Laure goes blind and her father builds a perfect miniature of their neighborhood so she can memorize it by touch and navigate her way home. When she is twelve, the Nazis occupy Paris and father and daughter flee to the walled citadel of Saint-Malo, where Marie-Laure’s reclusive great-uncle lives in a tall house by the sea. With them they carry what might be the museum’s most valuable and dangerous jewel.

In a mining town in Germany, the orphan Werner grows up with his younger sister, enchanted by a crude radio they find. Werner becomes an expert at building and fixing these crucial new instruments, a talent that wins him a place at a brutal academy for Hitler Youth, then a special assignment to track the resistance. More and more aware of the human cost of his intelligence, Werner travels through the heart of the war and, finally, into Saint-Malo, where his story and Marie-Laure’s converge.

I love World War II stories. This one has received so much praise (and the Pulitzer!) that I’m honestly surprised it has taken me so long to pick this one up. Super pumped to get to it.

Unleash your creativity and escape to one of the most beloved series of all time.

From the heraldry of the four Hogwarts houses to the extravagant wares of Weasleys’ Wizard Wheezes, the world of Harry Potter overflows with radiant color. Filled with intricate illustrations and elaborate designs used in the making of the Harry Potter films, this book invites you to imbue the wizarding world with color in your own explorations of Hogwarts Castle, the Forbidden Forest, and much more. You will also find pages of magical creatures and iconic scenes from the films, from the Sorting Ceremony in Harry’s first year, to the unforgettable final battle between Harry and Lord Voldemort, as well as some of the marvelous props used in the movies, such as The Quibbler, Quidditch World Cup posters, and the Triwizard Cup. Also includes sixteen pages of full-color art from the movies to inspire you as you draw.

This coloring book was a belated Christmas gift from my Mother-in-Law. She purchased it from Amazon and didn’t realize it was on back order. She just dropped it off at my house today and I can’t wait to start coloring!

Buffy the Vampire Slayer Season 8, Volume 3 by Joss Whedon (and others)

In a strange turn of events, Buffy begins to experience Twilight’s reach through the growing mass popularity of vampires—they even have a spokesperson with a reality TV show, Harmony Kendall! Rebel Slayer Faith continues on her journey to help other directionless Slayers, and Slayer Simone has also come back onto the Scoobies’ radar. Meanwhile, Dawn finally deals with her ongoing growing pains. Collects Buffy Season 8 #21–#30, and, from MySpace Dark Horse Presents, “Harmony Bites”, “Harmony Comes to the Nation”, and “Vampy Cat Play Friend”.

Buffy the Vampire Slayer was my absolute favorite show growing up. I’m not sure what’s taken me so long to continue with the series in this media, but the comics are hilarious and I love them.

There you have it! My January Book Haul. I have so many books on my physical TBR pile now that it’s starting to get a little overwhelming, so I’m banning myself from purchasing any new ones until I start to whittle this down a bit.

One thought on “January Book Haul!”