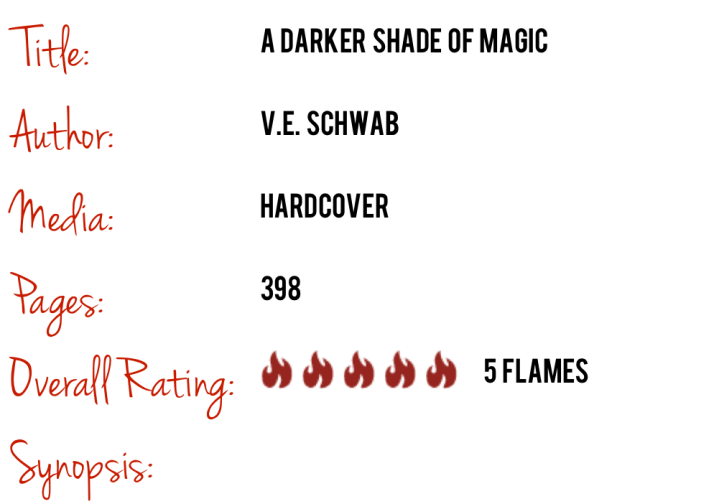 Kell is one of the last Travelers—rare magicians who choose a parallel universe to visit.

Grey London is dirty, boring, lacks magic, ruled by mad King George. Red London is where life and magic are revered, and the Maresh Dynasty presides over a flourishing empire. White London is ruled by whoever has murdered their way to the throne. People fight to control magic, and the magic fights back, draining the city to its very bones. Once there was Black London—but no one speaks of that now.

Officially, Kell is the Red Traveler, personal ambassador and adopted Prince of Red London, carrying the monthly correspondences between royals of each London. Unofficially, Kell smuggles for those willing to pay for even a glimpse of a world they’ll never see. This dangerous hobby sets him up for accidental treason. Fleeing into Grey London, Kell runs afoul of Delilah Bard, a cut-purse with lofty aspirations. She robs him, saves him from a dangerous enemy, then forces him to another world for her ‘proper adventure’.

But perilous magic is afoot, and treachery lurks at every turn. To save all of the worlds, Kell and Lila will first need to stay alive—trickier than they hoped.

A Darker Shade of Magic has been getting such high praise from everyone in the book community lately (here in the blogosphere and all over Bookstagram) and the sequel A Gathering of Shadows came out recently – along with the announcement that a television show is in the works, so I just knew that I had to check this one out.

I am so happy that I did! This book was absolutely fantastic. Victoria Schwab’s world-building had me gripped from the very first page. I could not get over how good it was and was reminded of the brilliance of Harry Potter throughout (that’s high praise, folks). I was only about a third of the way into the book when I ordered A Gathering of Shadows because I knew I was going to want to continue the series.

The Goodreads synopsis just does not do this book justice. I loved everything about A Darker Shade of Magic and that is making it really difficult to write this review because I have nothing critical to say. Not a thing.

The pacing is fast, the characters are compelling, and like I said before, the world-building is just amazing. Basically there are four Londons existing in alternate worlds. Grey London, which has little to no magic, Red London, which is where Kell is from and is the magically thriving London at the moment, White London, which is ruled by a set of evil twins and feels like the “bad part of town”, and Black London, which turned evil and fell many years ago. These Londons are “layered” on top of each other. People used to be able to travel between the Londons, but the “doors” were closed in order to keep the evil of Black London out as it was falling. Now the only people who can travel between the worlds are those with blood magic called Antari, and as far as we know, there are only two of them (our main character, Kell, being one of them).

The only reason the Antari are allowed to travel between worlds is to deliver correspondence between the royal families of each London, but obviously things start to go awry with that system.

Read this book! That is all. 🙂

3 thoughts on “[Review] A Darker Shade of Magic by V.E. Schwab”