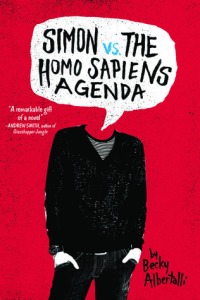 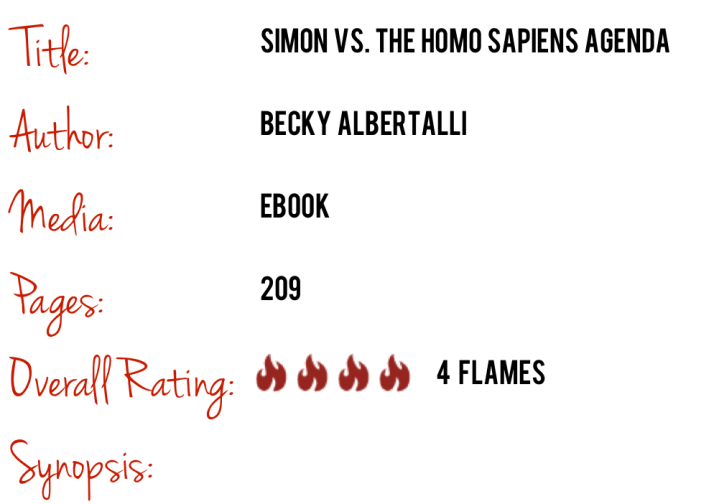 Sixteen-year-old and not-so-openly gay Simon Spier prefers to save his drama for the school musical. But when an email falls into the wrong hands, his secret is at risk of being thrust into the spotlight. Now Simon is actually being blackmailed: if he doesn’t play wingman for class clown Martin, his sexual identity will become everyone’s business. Worse, the privacy of Blue, the pen name of the boy he’s been emailing, will be compromised.

With some messy dynamics emerging in his once tight-knit group of friends, and his email correspondence with Blue growing more flirtatious every day, Simon’s junior year has suddenly gotten all kinds of complicated. Now, change-averse Simon has to find a way to step out of his comfort zone before he’s pushed out—without alienating his friends, compromising himself, or fumbling a shot at happiness with the most confusing, adorable guy he’s never met.

I’ve heard such good things about this book for a while now but for some reason I just never picked it up. A day or two after Christmas I got an email from BookPerk saying that the Simon ebook was on sale for $3.99 so obviously I snatched it.

I thought this book was absolutely adorable – so adorable in fact, that I finished it in one sitting.

Becky Abertalli must have lots of brothers or something. I had to check a few times just to make sure that it was written by a female because Simon was such a believable male character. Sometimes when you read a YA male POV written by a female author it just comes off feeling fake, but everything about Simon is realistic – which makes everything about this story feel realistic.

I loved reading the emails between Simon and Blue. They sounded like notes I could’ve pictured my husband and I writing to each other when we were in high school (except for the fact that, y’know, I’m a girl).

I gave this book 4 stars instead of 5 because I guessed who Blue was almost right away and because I thought there were a couple of unresolved plot points.

Overall, I totally see why there’s been so much hype about this book. I can’t stress enough how real the characters felt. Albertalli has a knack for getting into the teenage mind and she doesn’t shy away from foul language or sexual content, which let’s face it, is the way teens have always talked.

I’m so glad I finally got to this one and I completely recommend it to anyone who likes contemporary YA love stories.

4 thoughts on “[Review] Simon vs. the Homo Sapiens Agenda by Becky Albertalli”