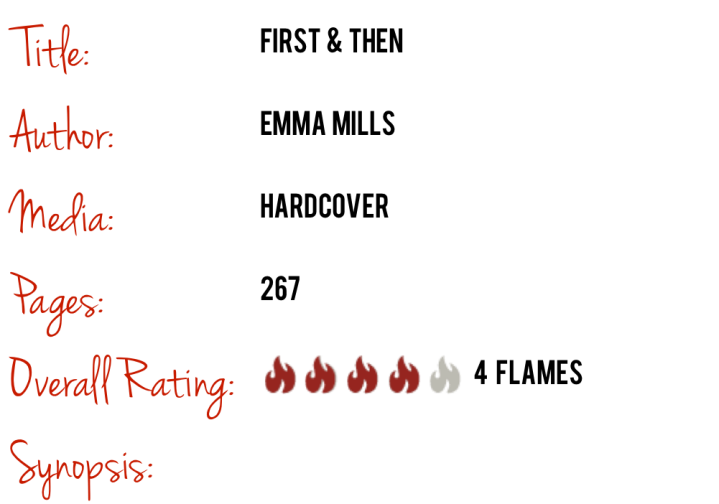 Devon Tennyson wouldn’t change a thing. She’s happy watching Friday night games from the bleachers, silently crushing on best friend Cas, and blissfully ignoring the future after high school. But the universe has other plans. It delivers Devon’s cousin Foster, an unrepentant social outlier with a surprising talent for football, and the obnoxiously superior and maddeningly attractive star running back, Ezra, right where she doesn’t want them first into her P.E. class and then into every other aspect of her life.

Pride and Prejudice meets Friday Night Lights in this contemporary novel about falling in love with the unexpected boy, with a new brother, and with yourself.

Guys, guys, guys! You know I’ve been on the search for some cute books for quite a while and last week I lucked out and ended up getting two at the same time!

First & Then was adorable. It was super short (just 267 pages) and had a good blend of all different sorts of relationships – friendships, family relationships, and of course, romantic ones.

While I genuinely did enjoy the entire thing, that’s not to say this book didn’t have its flaws. I honestly could’ve done without the Jane Austen obsession. I know that’s right up there in the synopsis but I didn’t feel like it added a whole lot to the overall story.

I also think that a lot of storylines were introduced and not all of them were given thorough conclusions. With the length of this book that’s not all that surprising – but if you can’t finish something that you’ve started, maybe you should cut a few of the weird side characters.

But most of this book was done well and I thought it was a pretty strong debut. I found out after I finished reading it that the author is YouTube “star” (I find it hard to say that with a serious face for some reason) Elmify. She has her own channel (Elmify as aforementioned) but she’s also in the John Green circle and partnered with Vlogbrothers to create the channel How to Adult.

Most of her videos are pretty funny and that same wit comes out in First & Then. I found myself snapchatting random lines to my BFF just because I thought they were highly entertaining. I especially enjoyed the use of the word “prostitot” to describe skanky freshman girls.

So overall this book was funny, cute, and just a light, fluffy read that I enjoyed quite a bit.

If you’re looking for something earth-shattering or that is slotted to become the next Great American Classic, then this book is probably not for you. But if you enjoy a light-hearted romance then I encourage you to pick this one up!