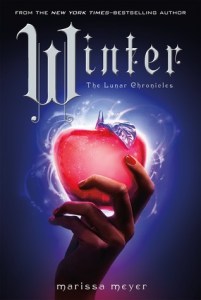 Synopsis (Spoilers if you haven’t read the others):

Princess Winter is admired by the Lunar people for her grace and kindness, and despite the scars that mar her face, her beauty is said to be even more breathtaking than that of her stepmother, Queen Levana.

Winter despises her stepmother, and knows Levana won’t approve of her feelings for her childhood friend—the handsome palace guard, Jacin. But Winter isn’t as weak as Levana believes her to be and she’s been undermining her stepmother’s wishes for years. Together with the cyborg mechanic, Cinder, and her allies, Winter might even have the power to launch a revolution and win a war that’s been raging for far too long.

Can Cinder, Scarlet, Cress, and Winter defeat Levana and find their happily ever afters?

For those of you who have read some of my previous reviews, you may recall that when a book is too big for its britches, I find myself analyzing the content to see what could have been removed. While enjoyable, I could not stop thinking that getting through this book felt like a chore and that it felt like it would never end.

I listened to the first 4 of the Lunar Chronicles books on audio. The narrator, Rebecca Soler is fantastic. I did not believe I could ever read these books in their physical form because I just love the way that Ms. Soler brings these stories to life.

However – when the audiobook is practically 24 hours long, that’s when I have to bust out the big guns (and by that I mean… I had to start actually reading it). I got a new job in July and my commute to work is significantly shorter than it was before, plus the husband and I now carpool which leaves very little time for audiobook fun. But, I digress.

While this book keeps its Lunar Chronicles flavor, and fans of the series will no doubt enjoy it, it was just way. too. fricken. long.

I reached a part in this book (and I won’t say what it was because spoilers) that the other books have been building to for quite some time. I thought for sure that was going to be the final climax, but no, I still had TEN AND A HALF HOURS LEFT OF THE AUDIOBOOK.

One of the things I loved about the first few installments in this series is how overwhelmingly original they felt. I couldn’t remember reading anything like them before. Winter, on the other hand, bears so much resemblance to The Hunger Games/Mockingjay that I found myself texting a friend of mine who had already read Winter to repeatedly complain.

I know this post sounds like a rant, and overall, the story wasn’t bad, but it didn’t feel very original and I was underwhelmed by the ending. I wish I could say that I loved this one as much as the others in the series, but it’s definitely towards the bottom for me.

On the plus side, I’m totally looking forward to Stars Above due out in February and even more so, Meyer’s new standalone novel, Heartless, expected in November.
Have you read Winter yet? Did you love it or were you disappointed like me?