Hunted across the True Sea, haunted by the lives she took on the Fold, Alina must try to make a life with Mal in an unfamiliar land. She finds starting new is not easy while keeping her identity as the Sun Summoner a secret. She can’t outrun her past or her destiny for long.

The Darkling has emerged from the Shadow Fold with a terrifying new power and a dangerous plan that will test the very boundaries of the natural world. With the help of a notorious privateer, Alina returns to the country she abandoned, determined to fight the forces gathering against Ravka. But as her power grows, Alina slips deeper into the Darkling’s game of forbidden magic, and farther away from Mal. Somehow, she will have to choose between her country, her power, and the love she always thought would guide her–or risk losing everything to the oncoming storm.

I think I have found a new must-read author. While this book didn’t capture me as immensely as Shadow and Bone did, I think it did a pretty good job at avoiding the often-fated Second Book Syndrome.

I find reviewing second books in a series to be a bit of a difficult task because I want to tell you all about what I liked and disliked while remaining as spoiler-free as possible, so that is what I will attempt to do here. Please don’t burn me at the stake if I let something slip. 😉 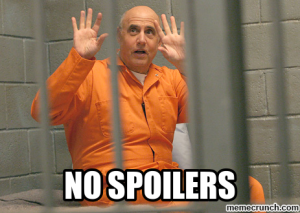 The second book in the Grisha trilogy opens with Alina and Mal on the run. I love these two together and I love how they can banter and make jokes with each other even in the worst situations. As far as details of plot go I’ll stop there, but in this book we see Alina grappling with her newfound power and trying to prepare for the battle she knows lies ahead of her.

We meet several new characters in this installment, including Sturmhond the Privateer who quickly became one of my new favorites. We also meet twins Tolya and Tamar and while I know this is entirely my fault, I constantly found myself confused between the two. I kept thinking that Tolya was the female and Tamar was the male (girl names usually end in ‘a’!) but it was the other way around. Both played major roles in this book but I just found it difficult to tell them apart most times.

As usual for a second book, the love story falters a bit and I found myself wanting to shake Alina and Mal and tell them to just get over themselves already. (Okay as I’m writing this review I’m starting to realize that this book does have a little bit of SBS but I still liked it quite a bit).

I have to admit that even though he is the villain, I really like the character of the Darkling and I was sad that he only had a few key scenes in this book. I’m really looking forward to Ruin and Rising to see what happens next.

On that note.. I think I’ll go start it now!

One thought on “[Review] Siege and Storm by Leigh Bardugo”

Ahhh my friends and I went to a midnight release party for #thecursedchild on Saturday and I felt just as giddy as I did so many years ago waiting for the other Harry Potter books to come out. . Thank you @_jk.rowling for letting me experience that magic again! . I finished this book yesterday and I thought it was definitely entertaining and I can absolutely picture it as a play in my head. I miiiiiight have to plan a trip to London to see it live next year 😜 . I won't say anything else at this point because spoilers but if you've read it already and want to chat let me know! . . . . . . . . . . #bookstagram #keepthesecrets #harrypotter #hp #bibliophile #jkrowling #harrypotterandthecursedchild #bookphotography #booksofinstagram #book #books #bookish #booknerd #bookworm #scholasticbooks #scholastic @scholasticinc #bookstagrammer #bookcommunity #igreads #bookshelf #youngadultbooks #yalit #scorpiusismyfavorite #scorpius
My friend @nikolieolieoh_ and I drove two and a half hours on Wednesday to meet @veschwab after work and she was awesome and hilarious and so sweet. Can't wait to start This Savage Song as soon as I'm done with my Harry Potter reread! . What are you #currentlyreading? . . . . . . . . . . . #bookstagram #bookstagrammer #bookcommunity #veschwab #adsom #adarkershadeofmagic #thissavagesong #books #bookish #book #bookworm #booknerd #bibliophile #yalit #ya #ireadya #bookphotography #goodreads #instabooks #instabook #booksofinstagram
Hi guys! I know it's been forever since my last post but I've been crazy busy and just haven't had the time for anything 😁 . But I'm back! I hope you all had a lovely 4th of July weekend (even if you're not from the US) . I finished #theravenboys last week and will be moving on to Dream Thieves soon! These books are so beautiful without their jackets! . . . . . . . . . . #bookstagram #bookstagrammer #books #bookish #theravencycle #maggiestiefvater #ditchthatjacket #read #reading #bookaddict #bookworm #booknerd #bibliophile #bookphotography #bookporn #youngadultbooks #ireadya #goodreads #yalit #booksofinstagram #instabook #instabooks #instareads
#waitingonwednesday Crooked Kingdom by @lbardugo I'm so excited for the sequel to #sixofcrows! I can't wait to get back into the Grisha world and see what Kaz and the gang have been up to. . . What release are you waiting on? . . . . . . . . . . . . . #bookstagram #bookstagrammer #youngadultbooks #bibliophile #ireadya #yalit #yalovin #epicreads #goodreads #bookworm #booknerd #bookcommunity #read #reader #leighbardugo #igreads #instabook #instabooks #book #bookish #books #bookaddict #bookaholic