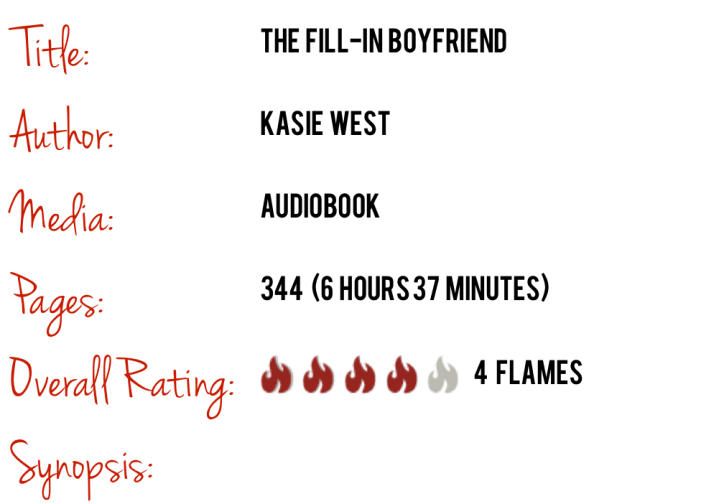 When Gia Montgomery’s boyfriend, Bradley, dumps her in the parking lot of her high school prom, she has to think fast. After all, she’d been telling her friends about him for months now. This was supposed to be the night she proved he existed. So when she sees a cute guy waiting to pick up his sister, she enlists his help. The task is simple: be her fill-in boyfriend—two hours, zero commitment, a few white lies. After that, she can win back the real Bradley.

The problem is that days after prom, it’s not the real Bradley she’s thinking about, but the stand-in. The one whose name she doesn’t even know. But tracking him down doesn’t mean they’re done faking a relationship. Gia owes him a favor and his sister intends to see that he collects: his ex-girlfriend’s graduation party—three hours, zero commitment, a few white lies.

Just when Gia begins to wonder if she could turn her fake boyfriend into a real one, Bradley comes waltzing back into her life, exposing her lie, and threatening to destroy her friendships and her new-found relationship.

I have been on the hunt for a cute will-they/won’t-they romance in the vein of Anna and the French Kiss for quite some time now.

While I won’t say that The Fill-In Boyfriend reaches Anna levels, it definitely helped to fill my need for a cute, girly book.

I’ve read a lot of very negative reviews of this book on Goodreads – mostly around the fact that Gia is a bit of a spoiled bitch. While this is true, I feel like that can be somewhat gleaned from the description and Gia’s character does grow up throughout the book.

Honestly I think that when you decide to read a book like this, you have to take it for what it is: an unsophisticated, cliched story with a predictable, yet heartwarming ending. AND SOME OF US LIKE THAT KIND OF THING, OKAY?

Now, let’s talk about the narration. Since I listened to this book on audio, it’s only right that I mention Shannon McManus’ lovely voice acting. I thought she did a fabulous job at bringing the characters to life. There was an emotional scene where Gia was crying and McManus did such a great job portraying it that I actually started crying while putting my makeup on this morning when I was listening to it. Not a great way to put on your eyeliner, let me tell you, but it just spoke to Ms. McManus’ skills.

So long story short, I enjoyed The Fill-In Boyfriend. My expectations were not all that high going in, but I knew what I was getting myself into and I really was pleasantly surprised. I will be looking into more of Kasie West’s books in the future when I need a fun pick-me-up.

3 thoughts on “[Review] The Fill-In Boyfriend by Kasie West”